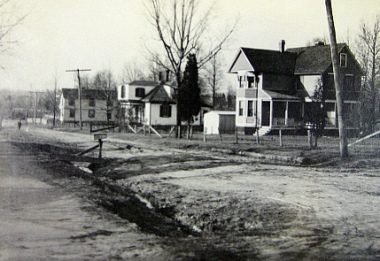 “The Berwyn Heights subdivision consists of [approximately] 400 acres, divided into 1,600 lots, improved by 13 miles of 60 to 70 feet wide streets, graded, graveled and guttered sidewalks, with 80 residences on the Heights and nearby vicinity, occupied by a sprinkling of Congressmen and army officers, but principally by U.S. Government employees.”

This description comes from a letter written by Congressman Samuel S. Yoder to the Maryland Public Service Commission (PSC) in November 1920. It was one of a series of letters in a campaign organized by the Berwyn Heights Association (BHA) to stop the closing of the Washington Interurban Railroad (formerly Washington, Spa Spring & Gretta Railroad) between Riverdale and Berwyn Heights.

The Berwyn Heights Association will be the subject of the next BHHC street marker. This citizen association functioned as the quasi-government of Berwyn Heights between 1915 – 1924. Its core business was to maintain the walks and streets in the subdivision, but frequently the Association worked with County and State agencies to improve living conditions in the community.

One concern repeatedly addressed at Association meetings was the sub-par streetcar service of the Washington Interurban Railway. The streetcar was the reason many residents had bought property in Berwyn Heights, believing that it would spur renewed development. However, the streetcar had gone bankrupt in 1914 and was sold to a subsidiary of the Washington Railway & Electric Company (WRECO). There were problems with the line almost from the start, including unreliable service, under-powered and outdated cars and later neglected tracks. Not surprisingly, this resulted in low ridership and a truncated schedule. 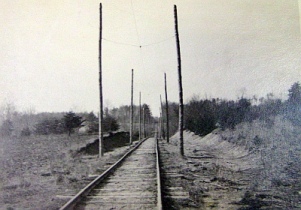 In September 1920, the streetcar owners asked the Maryland Public Service Commission (PSC) for permission to close the segment between Riverdale and Berwyn Heights. The request was approved in March 1921, but not before the BHA had put up a valiant fight. It organized a letter-writing campaign, conducted a survey of riders, enlisted the good offices of its Congressman, Sidney Mudd, and demanded the PSC hold a public hearing on the closure. When the PSC nonetheless approved the closure, the Association appealed the decision and delayed the end for a couple more months.

The PSC case file on the streetcar closure contains a wealth of information on Berwyn Heights, including a number of images of the streetcar line and newly built homes, many of which were kit houses ordered by mail. 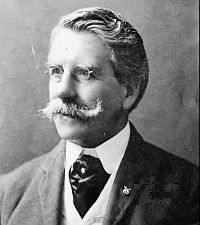 Robert Shea graciously shared a collection of memorabilia about his ancestor, Congressman Yoder, when he visited Berwyn Heights for this year’s historic marker dedication. The collection adds a personal dimension to the information already publicly available. Here then is the story of the talented and enterprising man who left behind the hardships of his childhood in a frontier farming community to rise to a position of wealth and influence in the nation’s capital.

Samuel Yoder was born in Berlin, Ohio on August 16, 1841, the second of 13 children of his Amish parents Yost Yoder and Nancy Hochstetler. His forebears came from Steffisburg, Switzerland in the early 18th century and initially settled in Pennsylvania. Samuel’s father died when he was 9 years old, and his mother re-married a widower, who had 11 children of his own. With so many children in one household, the oldest children, including Samuel, were placed with other families and made to work to earn their keep.¹ Samuel’s older brother Noah remembered with bitterness the low regard and mistreatment they received because their family was poor.²

The four oldest Yoder brothers soon left the community and, contrary to Amish teachings against taking up arms, joined the Union Army during the Civil War. Samuel enlisted on April 19, 1862 as a private in Company D of the 128th Regiment of the Ohio Volunteer Infantry and rose to Second Lieutenant in the 178th Regiment. He managed to get through the war without a major injury, but his younger brothers Moses and Jacob died. Noah was severely injured in battle and lost a leg.³

Although his medical practice was thriving, Yoder’s life took a different direction after he was elected Mayor of Bluffton in 1874. He became interested in politics and began to study the law in Lima, Ohio. He was admitted to the bar in 1880, elected Probate Judge of Allen County in 1881 and re-elected in 1885. While residing in Lima, he became a leading member of the Allen County Democratic Party and served as chair of the Central Committee until 1886.

In 1886, Judge Yoder was elected to Congress as the democratic representative of Ohio’s 4th district. He moved his family to Washington, and purchased a stately brick home at 203 Maryland Avenue, NE, just a short walk from the Capitol. He served in the 50th and 51st Congress, where he earned a reputation as an advocate for civil war veterans. As chair of the Invalid Pensions Committee, he passed an Increase Pension bill for civil war veterans. He declined to run for a third term but served as Sergeant-at-Arms in the 52nd Congress.

His congressional career behind him, Yoder turned his attention to private business. For the next 20 years, he incorporated, invested in, and led several for-profit corporations. He served as President of the Board of Directors of the National Glass Company, a trust that controlled the glass and ceramic manufacture in the country; General Manager of the United Realty Company of D.C.; 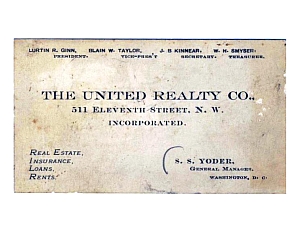 Washington Branch Manager of the Pneumatic Water Works Company of New York; and finally President of the Berwyn Heights Land and Manufacturing Company and the Washington, Spa Spring and Gretta Railroad.

In one of his ventures, Yoder journeyed to remote Sand Forks, WV in November 1900, where oil had just been discovered. The Copley Gusher initially produced close to 6,000 barrels of oil a day and attracted many prospectors. Yoder secured a claim on a nearby farm, and wrote about it in the Lima Times Democrat.4 (He may have been inspired by, or had a connection to the Lima oil field, which at the time, was one of the most productive in the country.5)

Throughout his life, Yoder maintained an affiliation with a variety of voluntary organizations. He was a life-long member of the Union Veterans Union in which he served as commander-in-chief (“General Yoder”) from 1891-1893, as well as of the Grand Army of the Republic, Burnside Post No. 8, both organizations that represented Civil War soldiers. Yoder was also a 32° mason and a member of several masonic and fraternal organizations in Ohio and Washington.6

Samuel Yoder’s last years were marked by the failure of the Berwyn Heights venture, ill health and the death of his wife in 1919. He died from cancer on May 9, 1921 and is buried in Arlington National Cemetery, Plot: Section 3, Lot 4093.

Favored with beautiful weather after days of pouring down rain, our Town celebrated another wonderful Berwyn Heights Day. The Historical Committee had prepared two dedications. In the morning, the Town Council dedicated a newly-renovated conference room, named for the late Geraldine “Jerry” Love, who used to run a small Town library in that location. Two of her sons, former Mayor Tom Love and his brother William were in attendance. They were happy that Mrs. Love’s many years of volunteer work in the library were thus honored.

After the parade, the Historical Committee unveiled this year’s historic marker, which commemorates the story of  the Washington, Spa Spring & Gretta Railroad, or WSSGRR for short. This streetcar company, which ran between 15th and H Street, NE in the District of Columbia and Berwyn Heights, by way of Bladensburg and Riverdale, operated between 1910 and 1923. Despite it’s less than stellar service record, WSSGRR helped spur development in these communities. Berwyn Heights saw a steady influx of well-to-do D.C. residents during this period. In 1915, they organized the Berwyn Heights (Citizen) Association and, in 1924, they had the Town rechartered to form a fully functioning government. 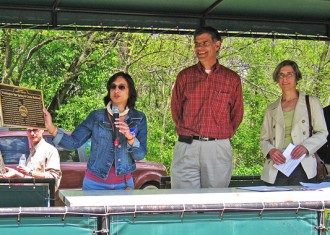 The Historical Committee was very pleased that Robert Shea made the trip from Connecticut to participate in the ceremony. Mr. Shea is the great grandson of former Congressman Samuel S. Yoder, who invested his personal fortune to build WSSGRR, and put Berwyn Heights real estate back on the market.