Here is an interesting video produced by UMBC’s Imaging Research Center (IRC) in 2010 visualizing early Washington DC. The IRC has worked with architectural historians, cartographers, engineers, and ecologists to assess the often-unreliable eyewitness accounts and sparse historical evidence to recreate a “best guess” glimpse of the early city. It ends with a surprising view of the U.S. Capitol and surroundings as it would have looked shortly before being burned down by the British.

This year’s Presidents’ Day reception drew our largest crowd yet. Guests enjoyed conversing over wine and cheese and listening to a talk by University of Maryland Archivist and Curator, Doug McElrath about what was happening at the time of the War of 1812 in Bladensburg and surroundings beyond the infamous battle for which it is known. Mr. McElrath highlighted interesting bits of information unearthed as part of the Bladensburg History Project, which he directs. The aim of this project is to recover the Town’s forgotten past and help restore its reputation as a “place that matters.”

Reaching back, McElrath explained that Bladensburg rose to prominence as a colonial seaport in the mid-18th century, trading tobacco for finished consumer goods, mainly with Scotland. But the town had to reinvent itself when the War of Independence disrupted the trans-Atlantic trade, and the Anacostia river silted in. Helped by its location at a crossroads between Georgetown, Annapolis, Baltimore and Alexandria, and its proximity to the emerging national capital, the town was able to adjust to a new economy based on grain production and manufacturing. 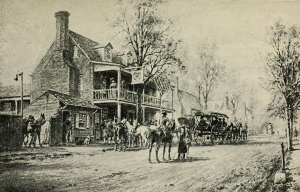 In its heydays, said McElrath, Bladensburg was a regional center for businesses and services.1 There were stores, warehouses, wharves, grist mills, forges, gunpowder mills, a blanket factory, tannery, as well as tradesmen such as carpenters, shoe makers, saddlers, tailors, among others. And there were a fair number of inns and taverns to serve the steady stream of travelers. As a place of business, the Town provided opportunities not only for people in the mainstream but also for those on the margins, including African Americans, to make an independent living. One example was a Margaret (Peggy) Adams, an African American woman, who owned land, ran a tavern and had connections to important businessmen of the day. George Washington, a frequent visitor in the town, stayed at her inn and reportedly recommended it as the “best-kept house in Bladensburg.”

Mr. McElrath had more surprising stories, including an Ode to Education composed by schoolmaster Samuel Knox of the Bladensburg Academy, and recited as an elocution exercise by his pupils in December 1788. McElrath intends to publish a paper on the subject and discuss them at a  symposium on October 11. He concluded by extending an invitation to attend the symposium and see an exhibit on historic Bladensburg opening at the University of Maryland in October 2014. 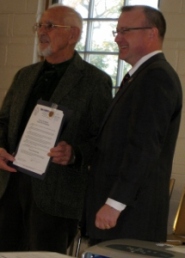 At its November 10 Veterans Day reception, the BHHC was pleased to honor Thomas Mutchler of 58th Avenue, a US Marine and World War II veteran. He fought in one of the the bloodiest battles of the Pacific campaign, the assault on the Japanese-held Island of Betio in the Tarawa Atoll, which took place November 20-23, 1943. PFC Mutchler was in the first wave of the amphibious assault, which required the Marines to wade ashore under heavy enemy fire because the water in the lagoon was not high enough for their amtracs to reach the beach. Former Councilmember Darald Lofgren arranged the ceremony, and Mayor Pro Tem James Wilkinson read a Proclamation on this 70th anniversary of the battle thanking Mr. Mutchler for his service.

Patrick O’Neill talks about Battle of the White House, November 10, 2013

Guests were also treated to an entertaining talk by freelance historian and archaeologist Patrick O’Neill from Virginia. O’Neill presented original research on the “Battle of the White House,” located at today’s Fort Belvoir, which took place September 13-15, 1814 during the War of 1812.

A squadron of 7 British war ships under the command of Captain James Gordon had sailed up the Potomac River to divert attention from the 5,000 British troops that were sailing up the Patuxent River at same time to attack Washington from the east. After defeating a band of Maryland and District militia at Bladensburg on August 24, the British reached the capital that same night, and, after being fired upon, burned all the public buildings.

Meanwhile, the Potomac squadron seized a large number of naval stores at Alexandria, which had surrendered to save their city. They set out on their return voyage with 21 prizes on September 2. Upon passing Fort Washington, they came under fire from Virginia militias, which turned into a pitched battle at White House landing. US Navy Captain David Porter had amassed 2,500 men on the bluff, and for 3 days fired mostly with muskets on the British ships that were held up by adverse winds. When the winds turned, the British nonetheless sailed away with all their ships, and met up with the Patuxent squadron in the Chesapeake Bay. It was at that point, according to O’Neill, the decision was made to attack Baltimore, where the decisive battle would be fought.