The eldest son Howard Livingston Benson (1890-1938) worked as a manager for Chase Bank in several locations throughout Central America. In Panama he married Sarah Veysett and they had 5 children. Howard Benson was on the verge of opening his own bank, when his promising career was cut short by the banking crisis of 1933, during which President Franklin Roosevelt closed all banks to stop the run on banks. The children were sent to live with their grandmother in Berwyn  Heights and graduated from Hyattsville High School. Howard followed them later. He was elected to the Berwyn Heights Board of Commissioners in May 1938, but died of a heart attack during a hunting and fishing trip in August 1938.

The second son Clarence C. Benson (1891-1951), a 1914 West Point Graduate, had an illustrious career as a U.S. Army cavalry officer and was a pioneer of tank warfare. During World War II, he served as a combat officer in North Africa and the China-India-Burma theatre and, in 1943, was awarded the Silver Star for distinguished service and the Oak Leaf Cluster for gallantry in action. 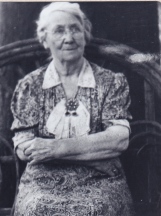 Margeret Benson survived her husband and her three children. She  died in Berwyn Heights in 1958 at age 90, and is buried at Rock Creek Cemetery, Washington, D.C.