In May 2012, the BHHC received an email from James Benson, in Altadena, California. He was interested in information about his great grandmother, Margaret (Maude) Benson, whom he visited in Berwyn Heights as a child in the 1950s. Further correspondence established that the Bensons lived in an American Four Square at 8403 58th Avenue (formerly Huntley Avenue) at the intersection with Goucher Drive. In its early days, the house stood next to the tracks of the electric streetcar line that served Berwyn Heights from 1910 to 1921. Thanks to Mr. Benson sharing information about his family and additional research, a very interesting story emerged. 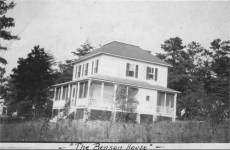 n moved into town with their three children Howard, Clarence and Margaret Flora sometime between 1910 and 1912. Previously, the family lived in Washington D.C. where Fred Benson worked for the U.S. Treasury Department, Office of the Comptroller of the Currency. In October 1909, Benson and several other investors incorporated the Berwyn Heights Building & Improvement Company (Berwyn Heights Company) for the purpose of developing the Town and attracting new residents.  This came at a time when a new electric streetcar, the Washington Spa Spring & Gretta Railroad (WSSGRR), was being built to service the area. The first cars started to run from the corner of 15th and H Street, not far from the Treasury Department, to Bladensburg in 1910, and service was extended to Berwyn Heights in 1912.

The year 1915 found Fred Benson leading the effort to establish a citizen association in Berwyn Heights. According to the minutes of the association, “on January 28, 1915 at the request of F. H. Benson a number of residents and property owners of Berwyn Heights met at the residence of Mr. Benson and decided to form the Berwyn Heights Association primarily for the betterment of walks and streets and incidentally the general improvement of conditions in which the local community were interested.” Those present voted to elect Fred Benson President of the Association, a position to which he was re-elected every year until 1921 when he suffered a stroke. He continued to serve as honorary President until his death from a 2nd stroke in 1923.