On Saturday, September 20, the BHHC hosted the Cornell Club of Washington for lunch at the Town Center. The Club was touring the sites where Ezra Cornell lived and worked when he helped build the first telegraph line in 1843-44. The tour helped kick off  the 150th anniversary celebrations of Cornell University, founded by Ezra Cornell in 1865.

Samuel Morse hired Cornell in 1843 to lay the cables for his experimental telegraph line along the tracks of the Baltimore & Ohio Railroad (now owned by CSX). Cornell built a plow to lay cables encased in a lead pipe in a trench between the B&O north and south-going tracks But during construction he encountered problems with the insulation of the wires. After further study, Cornell became convinced that it was better to string the wires on overhead poles. With Morse’s approval, he ended up building the telegraph line above ground in the spring of 1844, the wires strung atop glass insulators on the cross arms of chestnut poles. 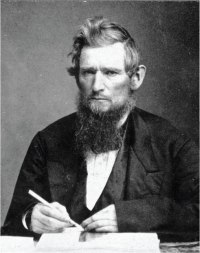 While working in the Washington area, Cornell had interactions with Charles Benedict Calvert, who supported the inventors and gave permission for the telegraph line to cross his Riversdale estate. The first test message was sent from Riversdale to Washington on April 9, 1844, 45 days prior to the official initiation of Morse’s telegraph on May 24, 1844 with the sending of the message “What hath God wrought.”

Cornell went on to build more telegraph lines along the east cost and the mid west. He invested heavily in the business and pushed for consolidation and standardization. After merging with the New York & Mississippi Valley Printing Telegraph Company in 1855, Cornell’s Western Union Telegraph Company became the dominant telegraph company in the country, and rapidly expanded its operations throughout most parts of the United States and Canada.