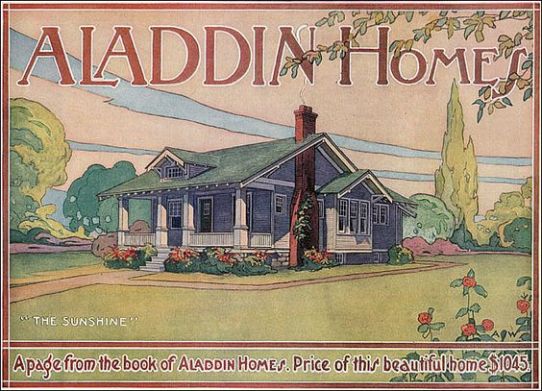 “This charming bungalow nestling in a setting of trees represents one of the best pieces of work of our master designers. Individuality is portrayed in all its lines and it is distinctly American in character. Sunshine implies cheerfulness, happiness and light. Could a more fitting name be given to this home?” (1920 Aladdin Co. Catalogue)

This 3-bedroom, 1-bath craftsman bungalow with south-facing front porch sits on lot 9 in block 32 at 5906 Pontiac Street. It was one of the properties conveyed by William H. Willard to the Berwyn Heights Company in December 1919 to form part of the start-up inventory of this resident-owed real estate company. Willard was a carpenter by trade and built several homes in Berwyn Heights, possibly including the Sunshine. His background was certainly useful, when he joined the Berwyn Heights Company in November 1919. He served as the Company’s Secretary until 1925, and supervised construction and remodeling activities in Company-owned homes.

The Sunshine was owned by Frank Chandler, a draftsman for the Granite Company, when Willard purchased an option in the property, which he then turned over to the Berwyn Heights Company. The Company listed the property for $3,700 in April 1920, including the adjacent lots 6,7 and 8. George and Mary Donovan bought it in May, 1920 and had it until April 1929. More recently, it has been owned by former Berwyn Heights Mayor, Jadie McDougald, who sold it to the Enderson family in 1978.