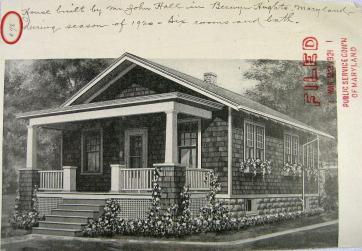 The Cedars Aladdin kit house. The image was filed with the Public Service Commission as part of an effort to stop the closure of the Washington Interurban streetcar line.

‘The Cedars bungalow, marvelously priced and remarkably designed, is available in 5 floor plans, one of which is sure to meet your idea of a convenient, sturdy home’.

This Aladdin mail order house was built in 1920 on lots 37 and 38 in block 43 by John W. Hall (1876-1959), a carpenter and building contractor. The house we find at the corresponding address, 8801 63rd Avenue, today differs slightly from the catalog image (see dormer window in south elevation). It may have been an upgrade, a different model year, or Hall made alterations to suit his own taste. 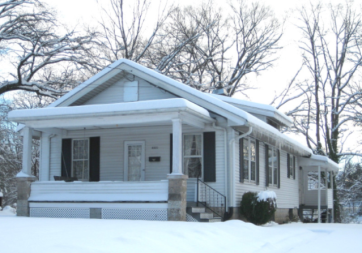 John Hall and his wife Blanche (nee Fink) purchased the lots from Elwood and Sallie Taylor in 1917 and 1920, respectively,1 as an investment. They intended to sell the improved property but failing that they probably ended up renting it.2 The house was eventually sold to E. Clare Turner in 1946.3

John Hall’s family on his mother’s side used to own a store in Aquasco near Upper Marlboro, which his mother Laura inherited in 1879.4 Laura A. Hall (1843-1905) was a widow with four young children5 when she married William W. Hall (1840-1909), a miner, in 1874. Residing in the Branchville area of the Vansville District,6 they bought a house in Berwyn Heights in 1899.7 This house was built by the Charlton Heights Improvement Company ca. 1894 and was located on lot 5 and part of lot 6 in block 7, Duncanson Avenue, which today is at 5707 Seminole Street. John lived there with his parents and in 1905 purchased the remaining part of lot 6.8

John (1876-1959) married Blanche F. Fink (1875-1950), daughter of Jacob Fink, a bricklayer and longtime neighbor of the Halls, around 1904. They had one daughter, Mildred Alice (1904-1999). John and Blanche joined the Berwyn Heights Association in March 1915.9 In 1918, John reported himself working on the construction of the Lincoln Memorial as an employee of the George A. Fuller Company.10 Thereafter, he likely contracted for construction projects around Berwyn Heights, for example entering an unsuccessful bid in 1921 to build the mail-order Harris kit house for the Berwyn Heights Company.11

John and Blanche’s daughter Mildred served as a personal secretary for Mrs. Lou H. Hoover during President Herbert Hoover’s term in office, and lived with them in the White House.12 In 1934, she married Thomas Allen Campbell, the son of a former Governor of Arizona in Palo Alto, California.13 The wedding was hosted by the Hoovers at their home on the grounds of Stanford University.