A ‘CHICKEN OR EGG’ QUESTION 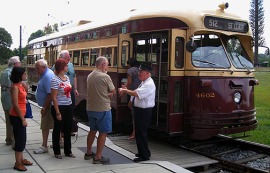 Our group took a rambling ride on TTC (Toronto Transit Commission) car 4602 and received a presentation from docent Ken Rocker about the streetcars that served Berwyn Heights 100 years ago.

In August of 1910, the Washington Spa Spring & Gretta Railroad (WSSGRR) sent its first trolley from 15th and H Street, NE to Main and Water Street in Bladensburg. An extension to Berwyn Heights opened in the spring of 1912. This last streetcar company to be launched in the Capital area was troubled from the outset. Lawsuits were soon filed about schedules not kept; there were frequent breakdowns; and management changed within a couple of years of its opening.

Mr. Rocker explained that WSSGRR was destined to have difficulties because it had to compete with the Baltimore & Ohio Railroad and the already well-established streetcar line of the City & Suburban, later bought by the Washington Railway & Electric, running to Laurel via Hyattsville, College Park and Berwyn. There simply were not enough people living in this area at the time, he said, to generate sufficient demand for a 3rd line. This was certainly true for Berwyn Heights, which had no more than a few dozen homes when WSSGRR started to operate. But the line also served East Riverdale, which was going through a growth spurt, and the old trading center, Bladensburg.

Seen from a different angle, the entrepreneurs who invested in this streetcar line, did so to spur development of the communities east of the Baltimore & Ohio Railroad. They had purchased real estate along the right-of-way and established real estate companies to induce D.C. residents to move to the suburbs. This had worked with some of the other streetcar companies operating in and around Washington.  One might ask what comes first:  development or transportation?