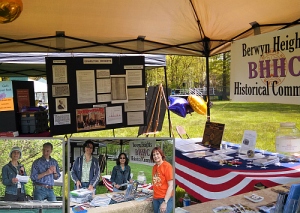 The day began with a glitch that had BHHC members scrounging for a canopy under which to set up the exhibits. A slightly damaged one was located in the Town office, which served just fine for the remainder of this bright, sunshiny day. Many visitors stopped by to chat, peruse the exhibits and pick up brochures.

This year the BHHC re-issued the Waugh Avenue (Berwyn Road) historic marker. The original one was dedicated in 2004 as the Committee’s first historic marker. Since then, we have learned much more about Waugh and the Charlton Heights venture, which makes up the first chapter in our Town’s history. The new marker corrects previous errors and puts Waugh’s role into context. 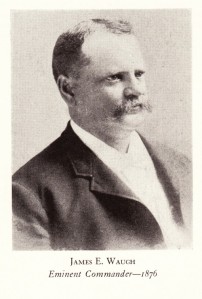 Waugh Avenue was named for James E. Waugh, one of seven Washington investors who in 1888  established the railroad suburb of Charlton Heights.¹ Waugh was the most committed to the project in the group. As the Secretary and General Manager of the Charlton Heights Improvement Company, he promoted the place tirelessly in the face of a deflating real estate market. He and a few associates pushed hard to sell properties to District residents, targeting particularly employees in the Treasury Department, where several of the Company’s directors had worked. Prospective buyers were shown around the development and promised a long list of planned improvements – from a first class opera house to a pleasure lake for boating and fishing – which never materialized. More troubling, buyers were asked to sign contracts binding them to monthly payments on lots purchased for which a deed of title was not always given. When the Charlton Heights Improvement Company went out of business in April 1892, law suits promptly piled into the D.C. Supreme Court, alleging fraud and demanding restitution.²

Waugh largely escaped the legal consequences through stalling maneuvers and withholding of documents. But he had gone deeply into debt to buy back a large number of lots from the Charlton Heights Improvement Company upon its dissolution.³ Many of these lots became the property of Jacob Tome, a wealthy Maryland Banker who had financed Waugh’s real estate dealings. Waugh died suddenly of a heart attack in May 1895. Much of his estate was distributed to creditors. In 1896, residents made a fresh start and had the subdivision incorporated as the Town of Berwyn Heights.