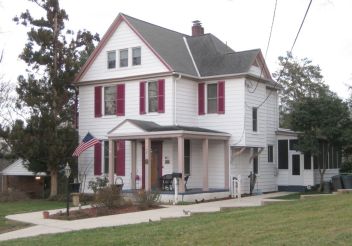 The Historical Committee was proud to feature the historic home of one of its members, Lee Fuerst, in this year’s Berwyn Heights Day and National Night Out exhibit. Lee and her husband Mark purchased their house (PG: 67-022-23 survey) in 2011, and have since turned it into a beautiful show piece of the Victorian “cottages” that originally dotted the subdivision. The house, once poetically named “The Maples,” was built circa 1888-1889 by the Charlton Heights Improvement Company,1 and retains many original architectural features: from shutter dogs to pocket doors to plaster moldings, even a chandelier made for gas lighting.

The first occupants of the house were Peter J. Keleher (1864-1927), his sister Hannah and her husband Terrence J. Gorman.2 The Kelehers were a close-knit Irish Catholic family from Wisconsin, who made their way to the Washington, DC area via Albany, NY in the early 1880s. Here, with Peter’s older brother Timothy leading the way, the Keleher brothers in turn worked for the DC Auditor’s Office3, and then the US Treasury Department’s 6th Auditor’s Office4. Sometime during this period, they became acquainted with Edward Graves and James Waugh, the principle developers of the new railroad suburb Charlton Heights (now Berwyn Heights), and helped sell properties in the new subdivision. In recognition of their role, Keleher Avenue (now Ruatan Street) was named after them.

After the collapse of the Charlton Heights venture, Peter Keleher was instrumental in turning Edward Graves’ mansion into a summer home for the DC-based St. Ann’s Orphanage. He was the President of St. Joseph’s Union, when the charity purchased the house in June 18975 and raised funds to remodel and expand it to accommodate more of the orphanage’s children.6 One year later in 1898, he joined the 4th “Immunes” Volunteer Infantry Regiment to fight in the Spanish-American War.7 After the war, he returned to work for the Treasury Department and later the Agriculture Department. In January 1904, he married Mary Ann Moran of Georgetown. 8 Throughout his life, Peter was an active member of Catholic congregations and benefit societies. He died in March 1927 and was interred at Arlington National Cemetery9, where his brother Timothy is also buried.

A couple of later owners of the Graves-Keleher-Fuerst house should be noted for the mark they left on the Town’s history. From 1915 to 1923, Pierre Christie Stevens (1858-1919), his wife Sarah and their daughter Marie Christie (1887-1952) lived there.10 Major Pierre Stevens, a Spanish War veteran and paymaster in the U.S. Army, came from a long line of illustrious military leaders going back to the Revolutionary War. Sarah was the daughter of William Bowie Magruder and Elizabeth Worthington Gaither, both whom were descended from founders of the State of Maryland.11 All Stevens’s were members of the Berwyn Heights Association, the precursor of today’s Town government. Marie in 1917 had charge of an Association cleanup committee which organized the collection of refuse in the fledgling community.12 She was also a committed volunteer for Evergreen, a Red Cross School for Blind Soldiers in Baltimore at that time. In April 1920, she married Congressman Frederick Hicks of New York, and during World War II, founded the Scottish Clans Evacuation Plan for bombed out English children.13

From 1935 to 1944, Charles Mayo Attick (1882-1975 ) and his wife Lillian owned the house, which in those days sat on a large property that included most lots in block 42. Additionally, the Atticks owned a number of lots in adjacent blocks 31 and 41.14 Some of the land would eventually be conveyed to the 9 Attick children, most of whom still lived with their parents when they moved to Berwyn Heights.15 The Atticks had previously owned a farm on Edmonston Road near today’s Capital Beltway, which was taken by the Resettlement Administration as eminent domain to serve as a staging ground for building the Greenbelt development.16 Charles Attick owned a barber shop in Berwyn near the streetcar line on the west side of the B&O tracks,17 and served on the Town’s Board of Commissioners from 1938 to 1944, the first 4 years as Chairman. His oldest son, C. Mayo Attick, took over the barber shop, an institution still remembered by some of Berwyn Heights’ older residents.