On January 28, 1915, residents of Berwyn Heights gathered at the home of Fred H. Benson and established the Berwyn Heights Association. Fred Benson was elected President and would lead the Association for most of its existence.

“The object of this association,” according to Article II of the Bylaws, was “to promote the interests of the residents of that sub-division of Prince George’s County, Maryland, known as Berwyn Heights and to form a body of representative citizens in this sub-division whose collective and combined influence and action will promote better conditions in the community.” To accomplish this, the Association sponsored a lineup of community events each year to raise the funds needed to maintain the roads, fix the school and clean up the Town. It also negotiated with State and County agencies to improve streetcar service, build a new school and, finally, to recharter the Town, which led to the establishment of the first functioning government in 1924. 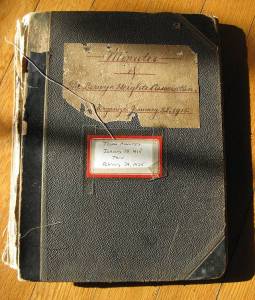 The meetings of the Berwyn Heights Association were recorded in a minute book, believed lost and then found, which will be on display during the BHHC’s February 15, 2015 Presidents’ Day reception. James Benson, a great grand son of Fred and Margaret “Maude” Benson, plans to be present and share his memories about visiting Berwyn Heights as a child. Join the BHHC to celebrate this 100th birthday of the Association and rediscover this chapter of our Town’s past.