Despite freezing temperatures and icy roads, the BHHC’s annual Presidents’ Day reception was a round success. Guests came from California, Virginia, D.C. and Maryland to celebrate the 100th anniversary of the Berwyn Heights Association. Many were descendants of the first President of the Association, Fred Hodges Benson, and enjoyed meeting up with distant relatives for the occasion and viewing the artifacts on display. 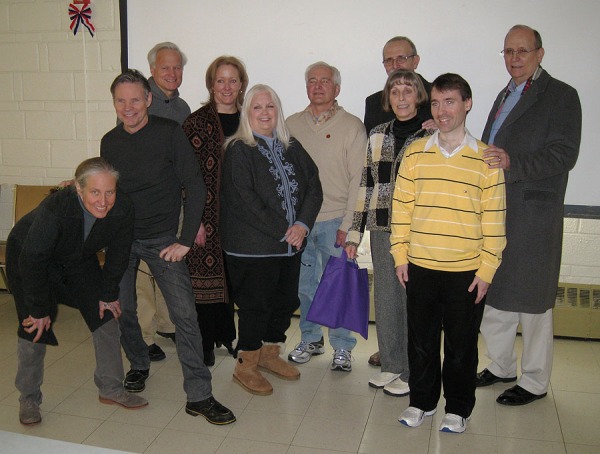 James Benson, who compiled a genealogy of his family, showed a video about his great grandparents Fred and Maude and their lives in Berwyn Heights. Another great-grandchild, Maureen Tobin, brought a most unexpected treasure: the minute book of the Berwyn Heights Company, passed down to her from her grandfather Clarence Benson. The Berwyn Heights Company was incorporated in November 1919 by Fred Benson, his son Clarence, and Association members Elwood Taylor, William Willard, and John McNitt, to buy, sell, lease and improve land in Berwyn Heights. It had purchased the remaining properties of the United Realty Company from a previous group of developers led by Congressman Samuel Yoder. Ms. Tobin graciously offered to loan the book to the BHHC to make a copy, which is sure to add valuable information to our historic record.

The event was capped by a presentation from former Councilman Darald Lofgren. Darald and his wife Sarah live in the house of Elwood J. Taylor, who was one of the most influential members of the Berwyn Heights Association. He variously served as its Treasurer and President and was in charge of the annual carnivals the Association held to raise funds for essential community projects. Darald and Sarah brought an old set of tools they found in their basement, and once were used by the Association to erect poles and string electric wires in Berwyn Heights. Darald summed it all up when he said it is amazing how one find – in this case the minute book of the Berwyn Heights Association – leads to another and helps piece together the past.